IN 1949, Hugh Cornell was amongst the 19 players who landed Carlton’s under-19 Premiership. Seventy years after the event, Cornell deputised for the few surviving members of the ‘49ers, as guest of the President at Saturday’s match at Marvel Stadium between Carlton and Gold Coast.

With both Don Hyde AM and the ‘49ers captain Alan ‘Alby’ Mangels sen. late apologies for the pre-match Luncheon, Cornell flew the flag in fine style. Now 88, Cornell was formally welcomed by Mark LoGiudice to an audience which included the great John Nicholls, and he later took his place in the stand to see the home team prevail by 24 points.

“I really enjoyed the experience. I give the club a rating of 100 per cent on everything. The people on my table were very pleasant and I even got the chance to share a few words with Chris Judd,” Cornell said.

“I actually got the first ‘49ers reunion going – a 50-year reunion back in ’99 – with the help of the late Chris Pavlou who was with the Spirit of Carlton. To then be invited back by the Club after 70 years was most appreciated.” 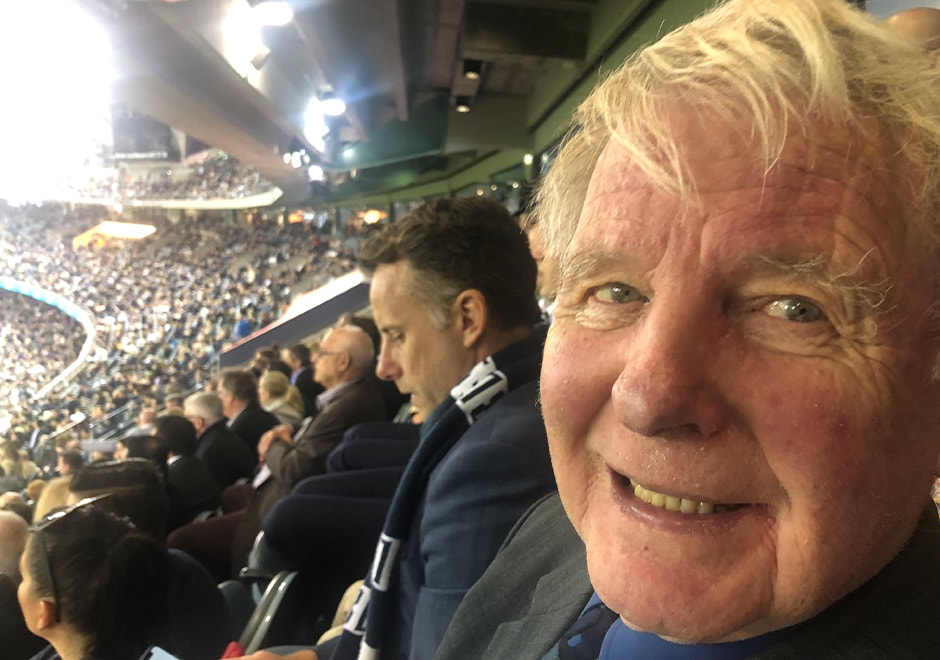 Hugh Cornell, a member of the 1949 under-19s premiership team, at Marvel Stadium on the weekend. (Photo: Supplied)

The ’49 triumph completed back-to-back Grand Final victories for the thirds, whose members also included Ian Clover and Dick Gill, the sons of Carlton greats Horrie Clover and Frank Gill. Jim Francis, the Carlton Premiership player at senior level in 1938, served as coach throughout that period, having taken control of the junior outfit when it was first admitted to the Northern District Football Association in 1944.

Francis, who succumbed to a knee injury the previous season, imparted his football nous on the players, with University High School sportsmaster Mr. Gaynor offering his services as an administrator.

The then Secretary Harry Bell, in his season overview for the 1944 Annual Report, somewhat prophetically reported:

“Mr. Gaynor and Jim Francis formed the ideal combination for the control of the boys, and it is hard to assess their value to your club, but it is thought that full realisation of the plan may be expected in two or three years, when five or six of these boys will be regular First Eighteen players, and when this is achieved it may then be recognised that the fielding of an under-18 years team in the N.D.F.A. was one of the most progressive steps ever undertaken by the Carlton Club”.

Cornell recalled that in those fledgling years of the under-19 competition, Collingwood was the only team not represented, “which is somewhat surprising when you think about it”.

“I think the 12th team at that time was a TAA team,” he recalled.

“Jim Francis was a wonderful coach. He asked his players to play hard and fair,” Cornell said.

“He was a real gentleman. He was always very measured and he never lost his temper.”

For the record, Carlton’s Trophy winners in the ’49 Premiership year included Harry Sullivan (Best and Fairest), Tom Jones (Most Consistent), Keith Robinson and Noel Rundle (who tied for Best Team Man), Max Thomas (Most Serviceable Player) and George Ferry and Gerald Burke (who tied for Most Improved Player).

Until recently, Cornell had dutifully convened reunions of the Carlton ‘49ers in every year since 1999 – the 50th anniversary of their famous victory at the old Princes Park ground.

Those reunions have ended with the ‘49ers’ advancing years – not that Cornell is letting Old Father Time have his own way. As a retired industrial chemist who turned his attentions to the food industry, the former RMIT Associate Professor is in the throes of completing a book which explores the many and varied human diseases and how they can be remedied through healthy lifestyle.

Previously, Hugh committed his energies into coeliac disease result, with the result that a tablet to assist coeliacs – of which there are one in 70 sufferers – is now on the market.

Hugh also had a book published by the English company Minerva Press, entitled Mostly Mozart, which in part explored the therapeutic qualities of the famed composer’s music.

“I discovered Mozart when I was 14 after my uncle, himself a musician, played Beethoven’s Pastoral Symphony to me. That was like a conversion,” Cornell said.

“Back then I was interested in American big bands like Glenn Miller’s and Tommy Dorsey’s, but when I heard the pastoral symphony that was great music, not good music – and that in turn led me to Mozart.” Coach Jim Francis stands is in the back row, fifth from the right.