Last night, in a  week where which Richmond readies for a tilt at its 12th League Premiership, Harmes and fellow members of the ’79 team returned to the MCG to savor the memory of what was the Blues’ 12th of 16 Premierships in their storied VFL/AFL existence. 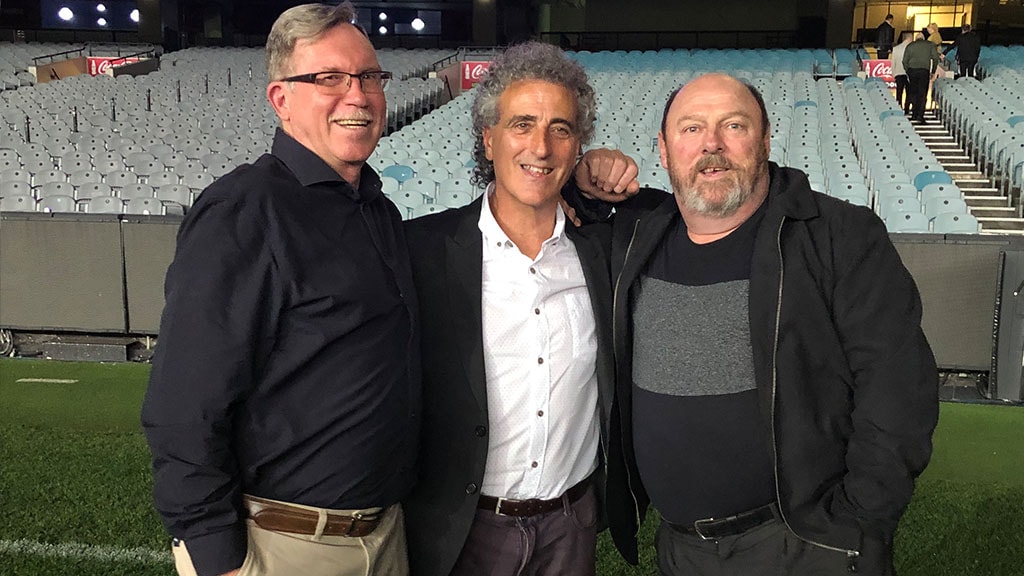 Also pictured for posterity were ’79 squad members Vin Catoggio, Kevin Heath, Warren Jones and Greg Towns, together with former club staff members George Frigo, Bob Lowrie (whose grandson Michael Gleeson took these photos) and Shane O’Sullivan, and the former committeemen John Minuzzo who, aside from Ian Collins, is one of only two committeemen of that year still living.

Lowrie, the Carlton runner on that frenetic last Saturday in September ’79, said that those whose fortune it was to be present on the ground following a reunion dinner in the Keith Miller Room would be forever thankful to reunion organisers Mike Fitzpatrick and his wife Helen.

“It was a really down to earth, lovely night. Mike and Helen are to be commended for what they did for those who were there. They made their dreams come true, “Lowrie said.

“Geoff Southby officiated as MC at the dinner and a number of players took the microphone to reflect on the ’79 Grand Final and what it meant to them. At one point, Kevin Sheedy, who was attending a Richmond reunion next door, bobbed up in the room wearing a Richmond and GWS scarf.

“I heard Tom Lynch say in front of 95,000 after Richmond’s win in the Preliminary Final against Geelong that footy doesn’t get bigger than this. Back in ’79 there were 114,000 at the Grand Final and Carlton beat Collingwood, so I’d say it doesn’t get any bigger than that.”

The ’79 Premiership wingman Michael Young, who swapped guernseys with Collingwood’s Ricky Barham moments after the final siren sounded, died one year and ten days ago.